Inspired by her travels around the world & family’s background in Italian cuisine, Cristina converted the restaurant into a “Ristorante Italiano.” The change comes to no surprise for those who know her father, Michael A. Colon (AKA Papa Colon), who was the owner of Giuseppes Italian restaurant at Casa Bella in Condado in the early 80s. Michael, who is also an attorney & served as President of Palmas del Mar in the 70s, raised Cristina in the industry life molding her into the restaurant owner she is today. Enlightened by the half year Cristina spent abroad living in Rome, mentored by her father, & trained by Martin Acosta the owner of Via Appia in Condado, Cristina put together the most authentic Italian menu that the East Coast of Puerto Rico has to offer. 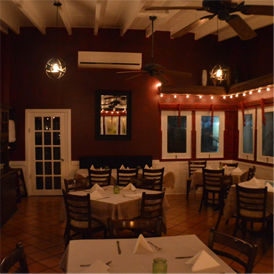 Best date night restaurant in Palmas, and the food and service are amazing!

This place could go against any top RI restaurant and beat them!

Im from RI which has some of the best Italian restaurants in the states. This place could go against any top RI restaurant and beat them! Cocina creativa · Degustación de menús · Cócteles clásicos

The food is excellent!

The food is excellent! The waiters are very friendly! Great atmosphere ! Porciones grandes